One of the more challenging things to fix on a pinball machine are switch matrix problems.

Most solid state machines have all of the cabinet and playfield switches arranged in a matrix of 8 columns by 8 rows, allowing for a total of 64 switches. There are of course exceptions to this, some brands don’t use a switch matrix, newer games use a larger matrix such as16x8, and some have a combination of matrixed switches and “dedicated” switches.

A switch matrix is used to reduce the amount of wiring and connectors needed. Rather than using 64 wires/connections for 64 switches, arranging the switches in a matrix requires only 16 wires/connections. The microprocessor strobes (turns on) each column, one at a time, and checks to see which of those 8 switches are closed. Then it goes to the next column, etc. This is done very fast so that any switch in the matrix can be instantly detected. Steering diodes are wired in series with each switch so that multiple simultaneous switch closures don’t back-feed through the matrix causing phantom switch closures. The diodes wouldn’t be needed if multiple switches couldn’t be closed at the same time.

(Early Bally machines skimped using diodes on the coin switches presumably because they thought no one would be depositing coins while the game was in play. Often in home use, the coin switches get shorted or damaged because there is no free play mode and people manually trigger the coin switch with their fingers. When this happens, phantom switches will be registered.)

A phantom switch closure is when the pinball rolls over a switch or hits a target switch, but an unrelated switch is registered by the computer. It is usually caused by a shorted diode, shorted pins on a switch, or some other wiring issue.

Now to the F-14 Tomcat.  When both flippers were pressed simultaneously, the computer registered a left drain switch (which triggers the kickback when it’s lit). Usually it takes more than two closed switches to cause a phantom switch closure.  So the extra balls were removed from the ball trough, which were triggering 3 other switches. Now when both flippers were engaged, the problem didn’t exist. So one of the ball trough switches factored into the problem.

When I have phantom switch problems on a machine, I like to mark them on the switch matrix. A shorted diode (or equivalent wiring problem) will always create a square or rectangle on the matrix. Below is the F-14 matrix. Notice the problem switches create four corners of a rectangle. 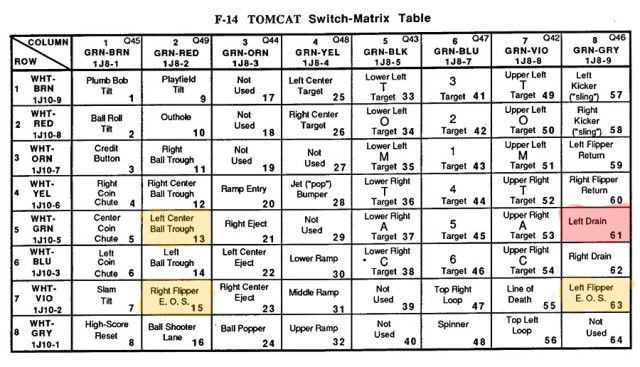 In this case both of the flipper EOS switches were incorrectly wired when someone previously replaced the EOS switches. The diodes were soldered to the switches, but the wires were soldered onto the wrong switch terminals, which bypassed the diodes.

Had I only checked and repaired the Right Flipper EOS, the Left Center Ball Trough switch would have been a phantom. This would would have showed up in during multi-ball play, when both flippers were engaged at the same time, and a ball rolled over the Left Drain (slim odds of that happening, but it could). I don’t know what the software would have done, but it probably would have ended the multi-ball prematurely.

On older solid state machines, the switch diagnostic test will only show the lowest numbered closed switch when multiple switches are closed simultaneously, so the test is not useful.