When playing the machine, occasionally a ball would be kicked up from the ball trough and then launched into play.  This would happen mostly during multiball when an additional ball wasn’t supposed to be launched, but I witnessed it once during single ball play.

There are a couple of automatic functions working regardless of the state of the game. The first is when the Trough Eject opto is blocked (switch 31 on the matrix), the machine software will kick up another ball from the trough. The second is when a ball is sensed in the shooter lane, and it’s not the initial ball of the turn, the ball is auto-launched into the playfield. So, a false signal on the Trough Eject opto during play will cause a ball to be kicked up from the trough and launched into the playfield.

After checking that the optos were functioning properly and reflowing some solder joints, the problem still existed.

After playing the machine some more, the owner discovered it was related to the flippers.  Intense flipper use would cause a ball to be ejected and launched.  This also explained why the problem was more prevalent during multiball, because the flippers were being used a lot more.  This is very similar to the WPC flipper reset problem, but instead of reseting the machine, it would kick out another ball.

We were able to verify this in the Switch Edges test. Hitting both flippers at the same time would cause the column of optos, switches 31-37, to momentarily go away (with no balls in the machine).  At this point, the problem was easy to reproduce. 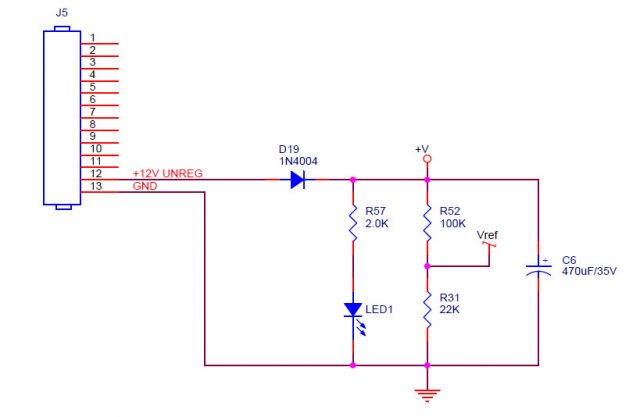 The signals for the optos are processed by the 16-opto Switch Board Assembly (A-16998). The board is powered by the unregulated +12V supply circuit from the Power Driver Board. The oscilloscope revealed that the +12V power was dipping during heavy flipper use. This was expected since it’s not regulated. However, on the Opto Switch Board, there is a diode (D19) and a filter capacitor (C6) to filter out transients and dips in the supply voltage.

The important part of the circuit is the Vref (reference voltage) generated by R52, 100K and R31, 22K. This signal shouldn’t have a lot of variation or electrical noise. But the oscilloscope revealed it did.  My first choice would have been to replace C6, but I didn’t have a suitable replacement with me. But since Vref is the most important, I added a 22uF capacitor across R31, the 22K resistor.  This fixed the problem.

This same circuitry is used on the 12-Opto Switch Board and the 10-Opto Switch board (and probably others) used in other Williams pinball machines of this era. The component designators are different on the other boards, so look at the schematic for the matching circuit as shown above. Look for the power coming into the board and going to a diode.  If you’re having this problem, replace the main capacitor (C6 in the diagram above) and if that doesn’t help, add a 22uF capacitor across the 22K resistor.