Sometimes when approaching a Gottlieb Systems 80 pinball machine, especially the Haunted House and Black Hole, which utilize different playfield levels, it’s easy to get overwhelmed. It’s good to stay focused on one problem at a time.

For the first issue, the pop bumper on the upper playfield had a broken wire.  Re-soldered the wire to the coil, and we checked that off the list.

I’ve seen shorted lamp sockets on these machines in the past, where the center conductor pin shorts against the can of the socket. I checked each GI light socket and found one that was shorted on the left side. I bent the pins so they wouldn’t short, replaced the fuse and manually actuated the “U” relay, and the lights lit and the fuse didn’t blow again.

The problem with the lower playfield up-kicker was traced back to the big edge connector on the bottom of the Driver Board.  The ground for that circuit was not making a good connection.  I removed the old pin from the connector and replaced it with a new one.

When checking the operation of all of the controlled lamps, there was one lamp not coming on at all. I replaced the bulb, but that didn’t help.  I traced the problem back to the Driver Board. It appeared the transistor was blown.  I replaced the transistor and it still didn’t work.  It turned out that once again, this was a faulty connection at the card edge connector, except this time the pin was shorting across the row to another pin deep inside the connector, thus grounding out the circuit.  This is what caused the original transistor to blow. I replaced the pin and the lamp started working again.

After replacing a few bad bulbs, the machine was working and playing well.

Tip: When adjusting the 5 volt supply on a Gottlieb Systems 80B pinball machine, adjust it to 5.00 volts or lower, but not below 4.85 volts. 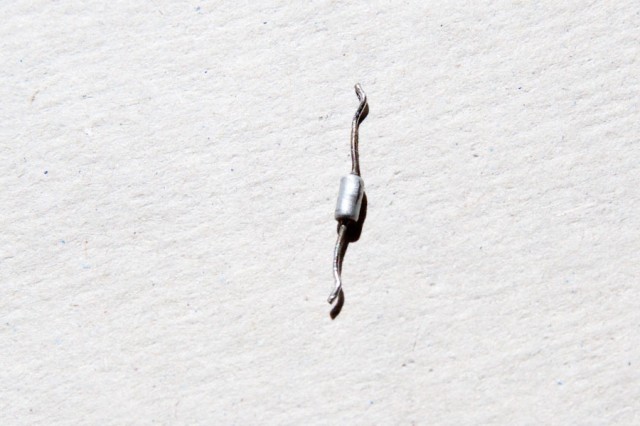 Zener diode (VR1) with a bulge and crack along right side.

Although the failed zener diode shown above was still basically working, I suspect it was acting intermittently, causing the CPU board to freeze up. Regardless, a bulging and cracked diode shouldn’t be trusted.  This was from a machine where the 5 volt supply was adjusted over 5.00 volts  (5.12 volts).

Also, the 5 volt adjustment pot on the power supply should be replaced with a fixed resistor.  The pot will get dirty and become sensitive to vibration, causing voltage fluctuations.   The best thing to do is adjust it for 5 volts, de-solder the pot from the circuit board, measure the resistance, and replace it with a fixed resistor or a combination of fixed resistors to obtain an equivalent resistance.

The machine was good condition.  I should have taken photos because the photos in the IPDB are of a machine in very poor condition.

The non-working pop bumper was simply a broken wire going to the coil. I resoldered it.  I checked the other pop bumper switches and noticed the top bumper’s switch was sticking.  If you press down on a bumper skirt and it doesn’t immediately pop back, you’re asking for a burned-out coil.  I cleaned the spoon that the bumper skirt rests on and that seemed to help a lot.  Often the pointed end of the bumper skirt that contacts the spoon gets roughed up and needs to be sanded or filed smooth and round again.  It’s a pain to do because it’s difficult to get to, and often involves removing it which requires taking the whole assembly apart.

The display on Player 3, least significant digit, was dead. I checked the card edge connector and made sure the card edge was clean.  I fired-up the oscilloscope and saw that the pulses (4 volt) were going into the digit driver IC, but no 60V pulses were coming out of the pin for that digit.  The other digit drivers within the IC were working fine.

The IC is a UDN6118A, which is no longer made.  These can the purchased used on E-bay from Chinese distributors. There was also a new one available at a US chip broker, for $15, plus $8.99 shipping.  Does it really cost $8.99 to ship something that weighs as much as a paper clip?  No!  For the same price, I can get 5-10 used chips from China.

For the time being, I swapped the Player 3 and Player 4 displays because the owner said the Player 4 gets used less often.  The owner is contemplating whether to repair the display or live with it.  I was surprised to see that PinScore doesn’t make aftermarket displays for Gottlieb (and neither does anyone else that I could find).

I also advised the owner that the rechargeable battery on the System 80A control board should be replaced before it leaks and ruins the circuit board.

I replaced bulbs and did a quick cleaning of the playfield.

When I played the game, I thought the sound board had something wrong with it.  There was a lot of background noise.  But it turns out the background noise is supposed to be crowd noise like at a stadium.  I verified by watching a YouTube video of the same machine.  You have to use your imagination.  I think it would have been better to have some background music with an Olympic theme.