One of the features of the pinball machine, Indiana Jones and the Pinball Adventure, is the Path of Adventure. From a servicing perspective, it could be renamed the Pain of Adventure. The Path of Adventure is also referred to as the mini-playfield in the diagnostics and error messages. It is located in the upper left of the main playfield.

For example if the left sensor is bad, and the playfield is in the right position, it will not move in either direction because both sensors are interpreted as blocked and the software won’t move the motor. The display can’t show it being in both left and right positions at the same time. But it will show the light beam missing from the opposite sensor. You will not be able to manually move the motor in any of the test menus.

In all of mini-playfields I’ve worked on, the lower or “left” sensor is the one that has failed. It may be just a coincidence.

If the following is done carefully, you can diagnose the issues with the motor without removing the mini-playfield. Open the backbox and locate Q30 and Q34 transistors on the large IO board. They will be transistors with metal tabs, just left of center. Connect one end of a jumper wire to ground (the easiest is the braided ground strap in the bottom corner of the backbox).

Often it’s a cracked solder joint or a broken lead on the opto sensor. It might be easier to replace the opto board. At the time of writing this, there are some aftermarket boards available. Search for the part number of the board, A-16657.

Removing the playfield generally isn’t too difficult as long as the head of the allen set screw which holds the playfield on to the motor shaft isn’t stripped. I usually replace it with a 8-32 phillips head screw. There are instructions for removing the mini-playfield in the manual on page 1-47.

With the machines I’ve worked on, the mini-playfield seems to move more to the right than the left. And, when in the center it seems to be tipped slightly to the right. 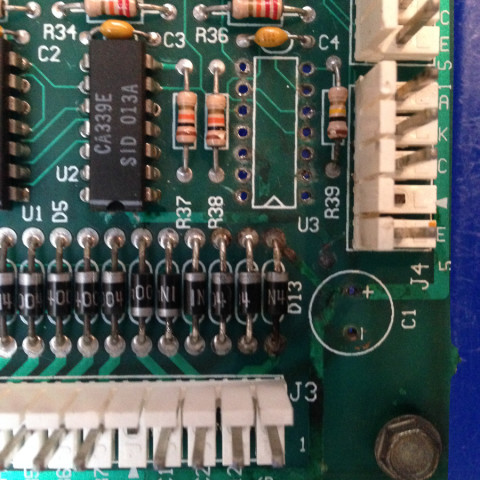 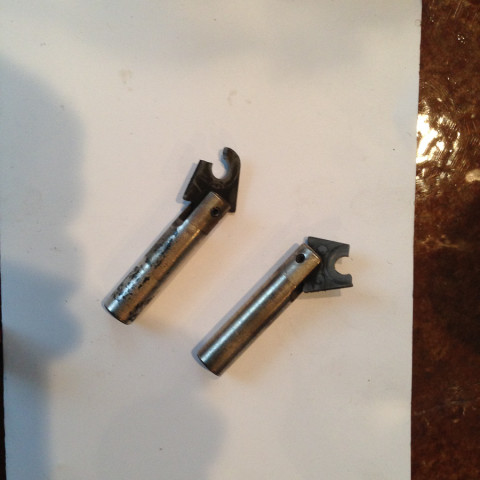 In Williams pinball machines of this vintage, the flippers are driven by the solid-state Fliptronics II board, which is located in the backbox in the upper left. There are 4 fuses, one for each possible flipper in the game: upper right, upper left, lower right, lower left (F901 – F904 respectively, each of which are 3 amp, slow-blow). In the case of many Williams machines, there are less than 4 flippers. If your game only has two flippers, you have 2 spare fuses available if you’re in a pinch.

In the case of Indiana Jones, there are only 2 flippers. When I was first contacted by the customer, I told him to check F904 which is labeled for the lower left flipper.  He went ahead and replaced it, but it didn’t solve the problem. So, I paid the machine a visit.

I determined that the flippers in this machine are wired to the upper flipper outputs, therefore F902 was the culprit. I vaguely recall running into this somewhere else.  Maybe that’s why it’s called The Pinball Adventure.