Symptoms:  Neither ball diverter was working, drop targets on mini-playfield were sticking.

The ball diverters at on the left and right ramps were simply loose on their shafts.  I tightened up the set screws on the left diverter.  The right diverter was binding a little after tightening the set screws and I determined the arm was slightly bent.  I straightened it and it worked fine. 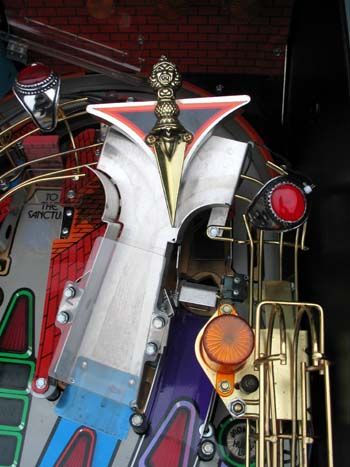 Right ramp diverter, with rings on either side. (Photo from ipdb.com)

I removed and cleaned the drop targets from the mini-playfield.  They had been lubricated with white lithium grease, and as usual, it had dried and was causing them to stick.

There were a couple of broken wires that I re-soldered to their correct locations; one was a flasher and the other a GI bulb.  I replaced 24 bad bulbs. There are four rings with lighted jewels incorporated into the playfield (see photo above).  They are illuminated with a grain of rice lamp that is hard-wired.  Three of those lights on this machine are out.  Marco has these and will order.  I’m guessing they are glued in place.

The machine also needs a new set of pinballs.   Any pinballs that don’t look shiny and new should be replaced on any machine in order to keep the playfield in good condition.

All in all, just routine maintenance.