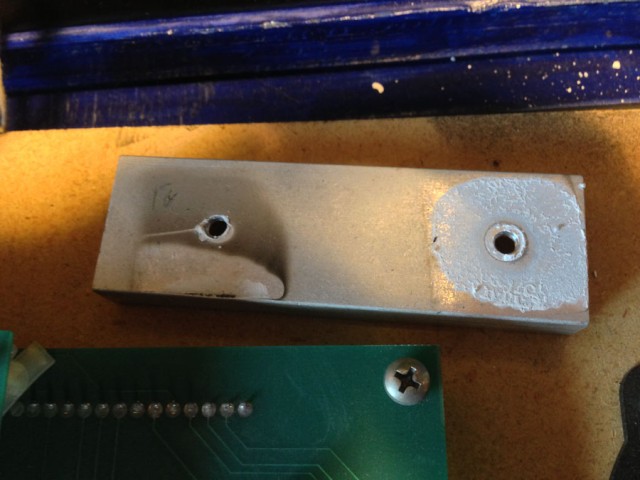 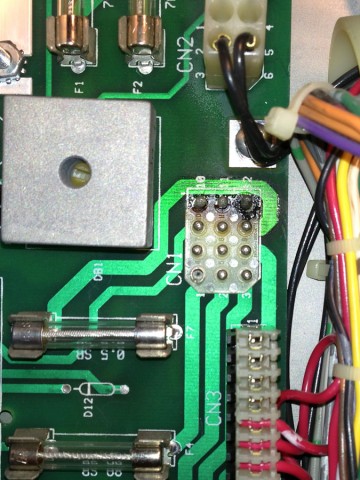 This jukebox had recently been purchased at an auction and the condition of it was unknown to the owner.

I started with getting the mechanism to stop scanning continuously. There were two problems associated with this.  The first was the add/subtract switch in the control center was sticking.  There are two solenoids and a ratchet mechanism that is responsible for starting the mech scan and stopping it after two passes.

After the add/subtract switch was working freely, it was evident that the subtract solenoid was never energizing when the mech reached the right end.  The subtract solenoid is energized by two different switches.  One is a service switch that the operator uses to stop the mech at various locations for loading records.  The other is a leaf switch on the rear of the mech that actuates when the when the mech reaches the right end.

The service switch correctly energized the subtract solenoid.  The problem was with the mech switch.  After removing the back cover of the jukebox, the mech switch was obviously bent. I removed the switch cover and straightened out the switch bracket.  I reassembled and readjusted according to the procedure in the service manual.   The add/subtract circuit then functioned normally.

Next up was finding out why the record would immediately reject after loading onto the turntable.  The first thing I did was to isolate whether the problem was electrical or mechanical.  I held down the trip lever as the record was loaded.  The trip solenoid buzzed loudly indicating that something was tripping it electrically.   I checked the trip switch that senses when the record is finished and found it was stuck on.  I removed the switch and flushed it with contact cleaner to remove the gunk that was causing it to stick.  After several minutes of exercising it, it finally started to work.  I remounted the switch and that problem was solved.

Next up was finding out why all of the letters associated with playing the left side of record.  I had read someplace on the internet that the PFEAIU only reads out in one direction.  This is incorrect.  It reads out in both directions like the majority of other Seeburg jukeboxes.  It took me a bit to find the problem, but it ended up being a broken wire on the Tormat contactor block.  Visually, it looked okay, but electrically it wasn’t making a connection.  I resoldered the wire and all was working.

I lubricated the mechanism.  The amp sounded like it needed to be rebuilt, but I noticed that someone had replaced some of the capacitors in the past.  The sound improved as we played more selections and the owner was happy with it as it was.

With my oscilloscope, I verified the signals going to the display and the outputs of the driver transistors.  The other digits were working fine but were not illuminating.  The 10,000’s digit had a shorted transistor (Q11, 2N5401) which kept that digit on all of the time.  Normally, only one digit is turned on at a time, but it is done so fast that the human eye doesn’t detect it, giving the illusion that all digits are on.

The controlled lamps on the playfield were dim and when in test mode, the power supply in the backbox would start buzzing when all of the lamps flashed on. I checked the voltage at TP1 and it was around 3V, which is too low.  The symptoms of buzzing and the voltage being about half, indicated a bad bridge rectifier (BR1).  This rectifier fails on many Bally machines of this era.  Once replaced, the playfield lights were at normal brightness and the buzzing stopped.