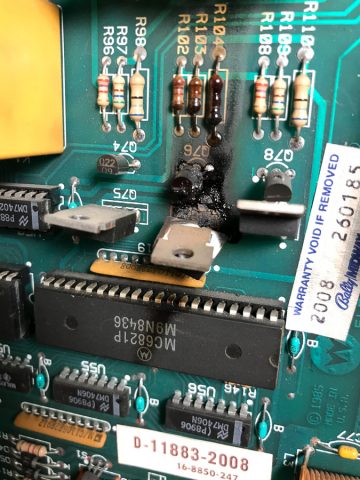 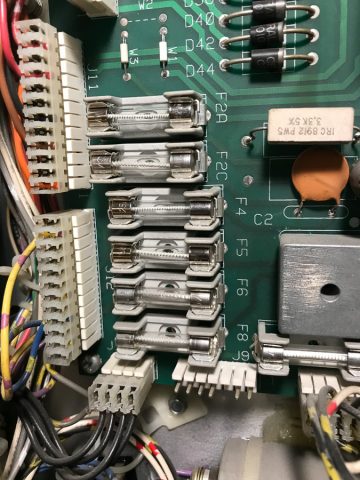 The first thing was to check the reset pin on the microprocessor (U15, pin 40).  The reset pin was staying low (zero volts).  The System 11B has two parallel reset circuits that will hold the system in reset if the +5 volts or the +12 volts is missing.

[Background: The +12 volt circuit is the same one that feeds the 5 volt regulator on the power supply board.  The idea is when the machine is powering down, you want advanced notice that the power is going away so the microprocessor shuts down cleanly without corrupting the memory contents. Because the 12 volts is before the regulator, it will be sensed by the reset circuit dropping first, and therefore can place the processor in reset while 5 volts is still present.  Likewise, when powering up, the 5 volts is the last voltage to rise and the microprocessor is held in reset until the 5 volt power rises above about 4 volts.]

It appeared that the White/Gray wire going to pin 6 of the J1 was not crimped well into the connector. I pulled it out of the housing and re-crimped it.  I also removed the power supply board and check for cracked solder joints on the connector.  They were okay. The machine booted up fine after that.