Symptoms: Scans back and forth without picking up record.
Location: Englewood, CO

There are a whole slew of reasons a Seeburg jukebox mechanism from the 1960’s and 1970’s will scan back and forth without picking up a record after pushing the selection buttons. It’s a common symptom without common fixes.

Seeburg was the only jukebox manufacturer from that era to use an electronic means to save selections that a customer selected. All other manufacturers used mechanical pins or levers. There are about a dozen items in a chain that have to work properly for the jukebox to make a selection, find the record and play it.

It’s best to start troubleshooting in the middle of the chain, which is the Tormat memory unit, then determine if the problem is a “write in” or “read out” problem. (Seeburg manuals refer to a third section called “trip”, but I include that as “read out”.)  Tony Miller, a former Seeburg engineer who has written books about working on Seeburg jukeboxes, has written a general guide for determining which part of the chain the problem is located. It simply uses a 1.5 volt battery to test which end of the chain is at fault.

There aren’t as many issues for the “write in” problems compared to “read out” problems. I found two problems with this jukebox, one more critical than the other.

The primary problem was the “write in” voltage was zero. This would normally be around 300 volts.  On TCC1 (Tormat Control Center 1) this can be measured at TS2 pin 2 (TS2 is a test connector facing the front of the jukebox on the TCC1).  Since I was getting zero volts there, I went directly to the OA2 voltage regulator tube (between the 27K and the 270K resistors) and I was getting the full 300 volts there.  So the problem was either the 270K resistor or downstream from it. I unplugged the Album Pricing Unit to isolate the TCC1.  The voltage was still zero. I checked the 270K resistor, and it was okay.  The only thing left was the 0.068uF capacitor.  It was probably leaking current to ground, causing a voltage drop across the 270K resistor.  I replaced it and the voltage came up to 290V which is good enough. 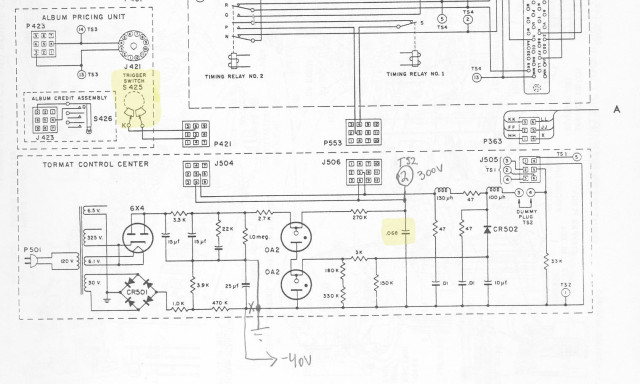 Simplified schematic (corrected) from the manual showing a portion of the “write-in” circuit.

The secondary problem were the write trigger contacts in the Pricing Unit. I don’t have a photo handy, but they are mounted to a lever that rotates when the cancel solenoid is operated. The contacts are shown in the left yellow shaded area of the schematic above and on the diagram below. 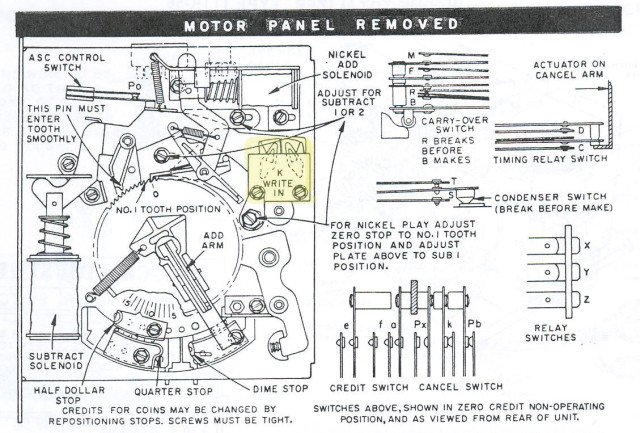 One contact rests on an insulator and the other rests on a copper piece. When the cancel solenoid actuates, the disk rotates moving the copper under both contacts, making a connection. With age, dust and arcing (this switch creates a 300 volt pulse), these contacts often have carbon build-up on them.

I connected an ohm meter across the contacts and measured an “open” when I manually actuated the subtract solenoid armature.  I cleaned the contacts with some 2000 grit polishing paper, followed by some alcohol remove any grimy residue.   I rechecked and I got 0 ohms when I actuated the armature.

I put everything back together and made a selection and the mechanism stopped at the record and played it.  All fixed!