This is the rarer electro-mechanical version of this pinball machine.

Next, the relay coil spring on the Reset Relay (AX) had been previously replaced with the wrong one that was much weaker.  I traded the spring from the Hold Relay, where the spring tension is less critical, to the Reset Relay and then re-adjusted the contacts. This fixed the problem with the machine not resetting correctly.

Next, many of the point scoring relays such as the 500 point and 5000 point were not holding though a cycle of the score motor.  They are all common and routed through the normally closed Motor 2B switch.  This switch was simply out of adjustment.

Eight relays are routed through a common hold switch on the score motor.

One of the formed switch blades had broken off the score motor and a replacement was obtained from The Pinball Resource. 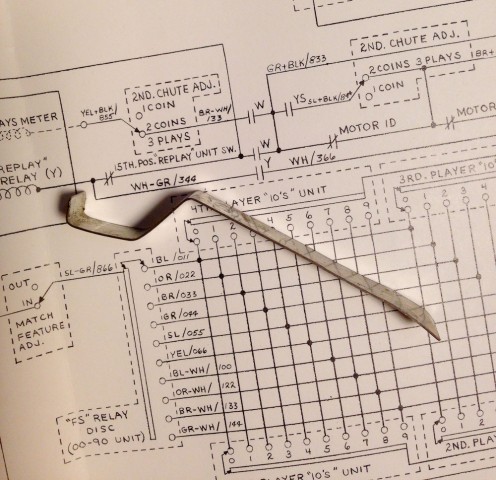 Some of the contacts on the player unit needed to be cleaned and adjusted, which is a typical problem with Gottlieb multi-player machines. The bonus stepper unit was gummed up and not advancing or awarding bonus.  It was cleaned and rebuilt.

The spinner switch needed adjusting because it was scoring points with just vibration from the playfield.

After replacing a broken light socket and spraying the back side of the backglass with Krylon Triple Thick Clear Glaze (to help stabilize the paint and keep it from peeling), the machine was looking and working great!