A few months later, I was called back to the Judge Dredd machine mentioned in this previous post.

The thermistor in the power line module had burned out.  I replaced it and tested the machine.  I noticed that the shorted switch-row problem had returned.  The nice thing was, it was a solid failure this time and I was able to track it down.

In my previous post, I mentioned the short would go away if I unplugged J212.  This was the case again, and it deceived me into thinking the short was somewhere along this stretch of wires that heads towards the coin door.   In the switch table in the service manual, Switch 24 is listed as Always Closed.

(The switches and lamps in a pinball machine of this vintage are multiplexed in a grid.  This reduces the complexity of circuitry and wiring.  Rather than having 64 separate wires to 64 switches, by multiplexing, 64 switches can be monitored with just 16 wires.) 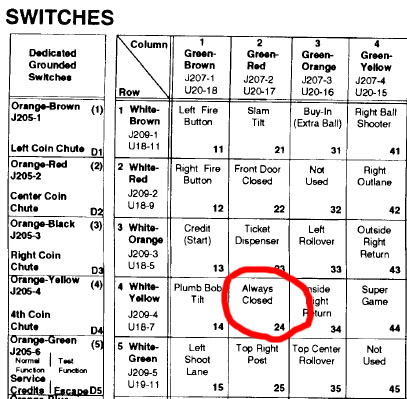 Somewhere in the machine, there is a diode connecting Column 2 and Row 4.  It turns out it’s on Coin Door Interface Board, which is were the wires from J212 end up (D2). 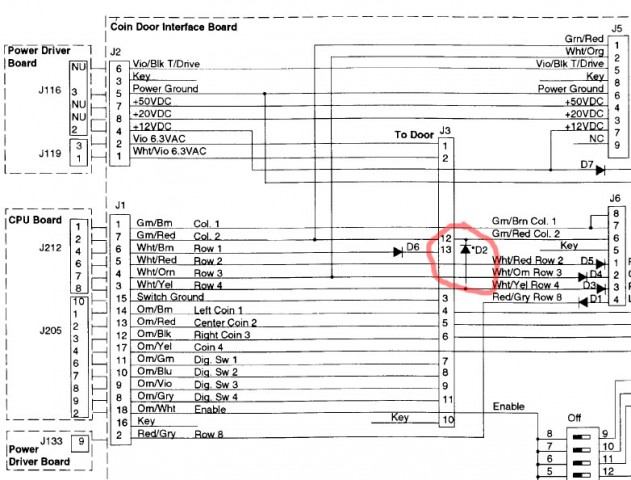 What is deceiving is that when a column is shorted to ground, any switch that is closed will show that row to be shorted.  Since switch 24 bridges column 2 and row 4, every switch in row 4 was shown as closed, leading me to believe the problem was in row 4.  But when I closed other switches in column 2, the entire corresponding row would show as closed.  And as a verification, I open the diode at D2 and the remaining switches in row 4 began functioning normally.

Once I determined the problem was actually in column 2, and the symptom indicated it was shorted to ground, I unplugged J205 and J212 to isolate the CPU board from the rest of the machine.  I measured the outputs of each column driver and found the output of U20, pin 17 was stuck at ground.

I replaced the ULN2803 with a new part and everything in the pinball machine tested normal.