In an odd quirk of fate, I’ve had a rash of jukebox amplifiers to work on, as well as some Seeburg control centers.  The amplifiers are a Wurlitzer 532, Seeburg TSA1, Seeburg SHP3, and an amp from a Rockola 424.  The 532 is the oldest and the SHP3 is the newest. 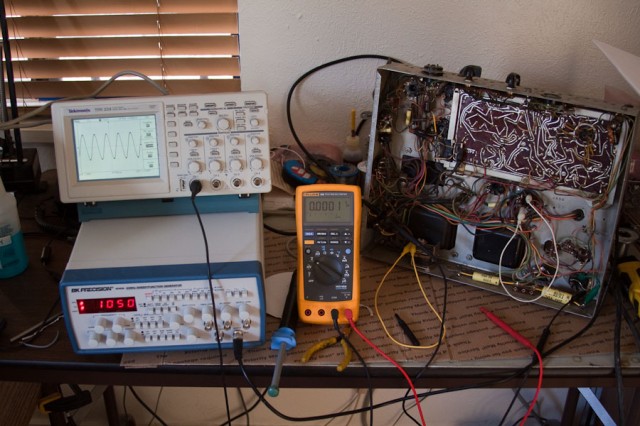 At the customer’s house, the 532 was exhibiting all kinds of problems.  The sound was popping, cutting in and out, and most of the time was severely distorted.  One of the items that was causing all of the popping was a bad connection in the octal socket between the mechanism and the amplifier.  The power to the amp runs out, and back in, through the connector (except for the tube heaters which are on all of the time).  Also the amp has a rectifier on it which supplies power to the mechanism.

Each female pin on the octal socket is shaped like a “U”.  Over the years with the plug being unplugged and replugged, the top part of the “U” spreads apart and doesn’t make a good connection with pin. I took a sharp ice pick and poked it down into the edges of each hole and bent each arm of the “U” so they would be closer together.  That solved that problem.

However, there was still a lot of distortion.  I opted to bring the amp back for a bench test.  With a bench test, I can inject a known signal and trace it through the circuit with an oscilloscope to see where the signal breaks down. In this case, it was bad at the output of the first tube in the chain.  It wasn’t a bad tube, but a bad electrolytic capacitor connected to the cathode of the tube.  The amplifier will be getting re-capped (replacement of all electrolytic capacitors).  It’s overdue.

At the customer’s house the amp was distorted especially in the lower frequencies.  Changing the volume had no effect.  It seemed to be in both channels.  There wasn’t good stereo separation.

I brought the amp back for bench testing.  There is a coil in the amp that connects the left and right channels together.  I’ve seen this in other jukebox amps of the late 1960’s, and it doesn’t make sense.  After I disconnected it, I discovered the distortion was only in a single channel.  And it took me a while to discover it as I had to drive the input fairly hard for it to show up.  And it was more prevalent at bass frequencies.  It looked like someone was taking a bite out of the lower side of the sine wave (it wasn’t at the peak).  After checking the bias and the caps around the preamp stage where the problem was, I concluded it had to be the transistor.  I replaced it, and the problems cleared up.  I chalk that one up to weird transistor failure.

The service manual calls this a 40276A.  The amplifier itself has 40218 labeled on it.  Regardless, one channel was completely dead.  The mono switch didn’t have any effect, so the problem was in the output stage.

I brought it back for bench testing. I quickly discovered the 1200uF capacitor used in the feedback circuit had a broken lead.  This amp had been previously worked on by somebody else and they had replaced the capacitor without securing it well.  The vibration of moving the jukebox to Colorado from the east coast probably caused it to break. Since the lead was broken right at the capacitor, it needed to be replaced.

While checking out the amp, I noticed some electrolytic capacitors where leaking. 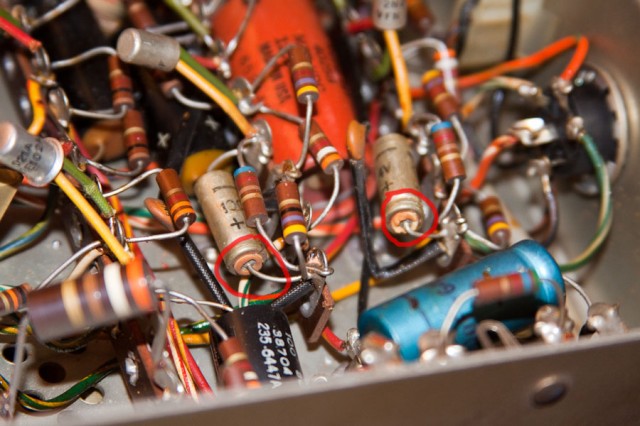 Those 100uF capacitors got replaced, as well as the main filter capacitor (2940uF was replaced with a 4700uF).  After cleaning the preamp wirewound pots (not easy or effective), the amp is working well.

The Seeburg SHP3 amplifier will be covered in a future post about a Frankenstein jukebox.