Symptoms: Delivers too many balls to the shooter lane.

In this era of pinball machine, the ball trough is monitored by infra-red emitters (LEDs) and detectors (photo transistors).  The detectors are on one side of the trough, the emitters on the other side of the trough.  The game senses the ball when it breaks the beam of light between the two.

The owner had suspected faulty opto boards and had replaced them to no avail.

The test diagnostic (“switch edges”) showed that the Trough Jam opto was not working.  It said there was a trough jam all of the time, even when no balls were present.  This caused the firmware to think the ball was jammed and to try shooting it again into the shooter lane. 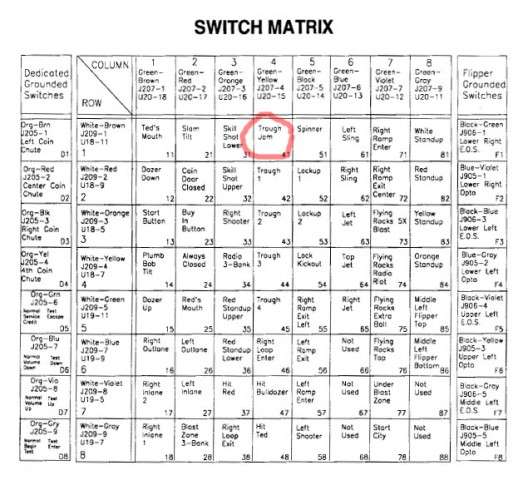 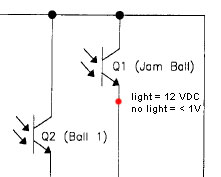 We spent some time tracing the row wire through the various bundles, not an easy task when 40-50 wires are tie-wrapped together.  The row and column wires are daisy-chained from one switch to the next, zig-zagging across the playfield. We found it broken at the White Standup switch.

I re-soldered the wires to the switch and everything worked.

While the switch edges diagnostic was running, we discovered and unrelated intermittent switch.  We found it easily at one of the eddy current sensors because the LED on the sensor board would blink whenever the connection was lost.  One of the wires was pulling out of the connector.  I tie-wrapped the top of the connector to act as a strain relief and hopefully it will hold.